Among others, Thermal Barrier coatings (TBC) are critical in the structure and efficient operation of Jet Engines. While it is well known that TBC exhibit time dependent behaviour at high temperatures (near 1000°C), accurate measurement of their creep behaviour requires a fully instrumented indentation apparatus capable of recording load, displacement and time during the experiment, while maintaining very precise control of the temperature.

In this experiment, the load is maintained constant for a period of time. The measure of the penetration depth as a function of time indicates the time dependency of the material’s properties.The example is shown for two NiAlPt alloy coatings used as a thermal barrier. 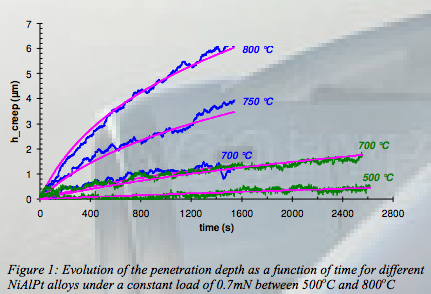 Thanks to advanced analysis of this data,the complete time dependent constitutive laws of these coatings can be determined up to 1000°C.

At room temperature, one has a beta microstructure (beta) and the other a martensite microstructure (green), hence their behaviour is expected to be significantly different.

In the creep behaviour at 700°C showed in Figure 1, both materials exhibit similar behaviour, which indicates that they both have the same microstructure at 700°C.

This is confirmed by the fact that 500°C is well below the calculated Ms and the compound is likely to be in the martensitic form.